Well Coco duly obliged ( In the end ) and presented us with 6 little piggies , about a week late but all in good fettle. we have one Red ( Ginger ) the rest are blonde. as you can see from the pictures they are as cute as hell and mum was happy to let me close and give her some cuddles. Well that was then ! Now she has gone in to full protect mode and growls and snarls at my every move. 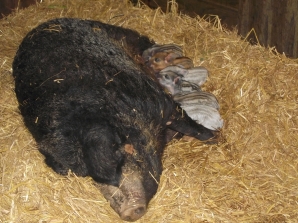 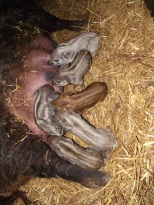 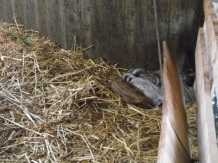 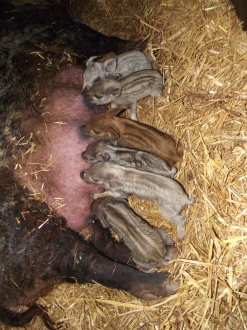 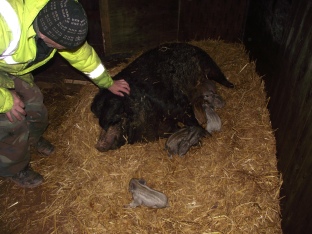 Because we have our “kid weaning unit ” full of Pigs we have had to adapt an old shed ( donated by my son “B” ) to be a weaning unit for the impending arrival of an as yet  unknown quantity of week old billy goat kids. We have had to use some crates I acquired from DMA Stairlifts wellington to extend it to a serviceable size. We shall use some more to line the inside in order to proffer some insulation. We had everything we needed except roofing material so a decision was taken to make it “Live” an edging strip to hold the growing medium in place will be followed by a grass and seedum topping I may even put a ladder of some sort to let the goats pop up there to keep the roof trimmed.

Our poor poultry are still banged up and are likely to be till the end of February due to the European Avian flu scare   Im not su re how many birds we will have left by then , whilst we may have them isolated from the indigenous wild birds , The isolation is driving them BONKERS. They are really are getting stir crazy picking on one another etc.

Still on the up side even in a uk winter the view is quite something . 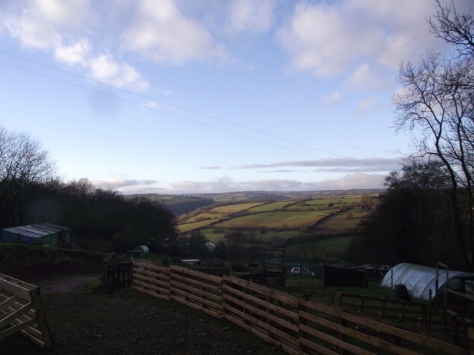 They are Here; And as cute as we imagined Check out the rest of the pictures on our face book. More to come here soon :-

We are pretty sure we can count so, We are informed that a pig takes 115 days from conception to birth. Well WE are convinced pigs cannot count. As We were there to see gyorgy “doing the Deed , so to speak” we made the stupid assumption that 115 (Give or take) days later we would be knee deep in piglets. No .. Not yet So either we got it wrong or No one explained to the pig. Anyway She is the size of a house and fidgety as hell so I hope all will be sorted soon. It has just made for a stressful holiday period as we have been running up and back to check every few hours only to be disappointed every trip.
Back to the other stuff , As with that at least you get an end product. We have acquired some scaffold boards which we have utilised to tidy up around the entrance road.  We started by making some steps up to the barn and then used some more to “Edge” the road on the opposite side it should stop the gravel rolling off down the hill at least. 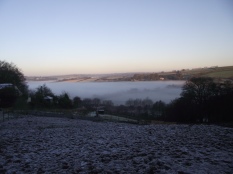 Eric and Ern can cope with the cold its Rain they hate still when cold they dont leave the warmth of their shelter until they are sure there is food available and apart from the offering of Rolled barley , I had cut down the remaining Brambles and Soft rush for them to chew upon

As we have a multitude of Willow around the place We decided to have a bash at a Living arch up by the entrance it was a bit of a palaver working out how to do it with different lengths of branches but its seemed to turn out ok . We shall keep you updated with its progress ( in both verse and Pictures )

fog is great WHEN YOU ARE ABOVE IT 🙂 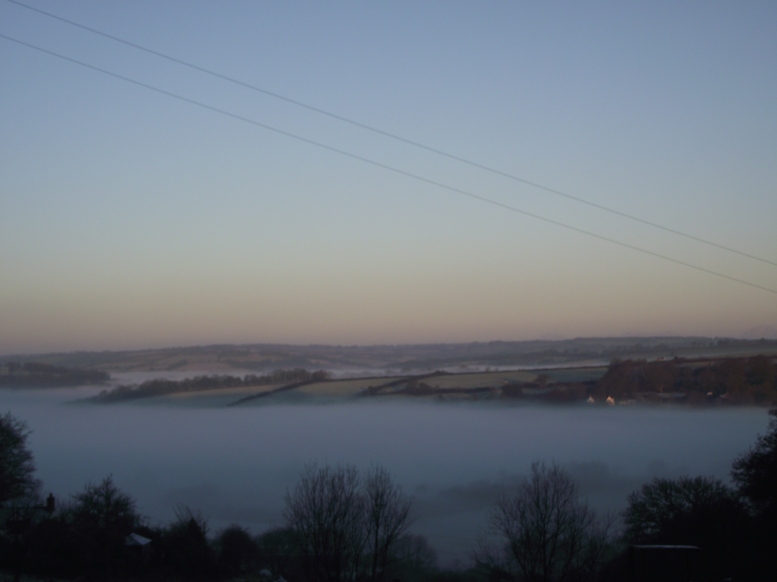 Right till next time . And once again I hope everyone has a great 2017

It is 1.30am UK Time I have just returned from CoCo the Heavily pregnant SOW .. and can report , That is still the case 😦

It would appear I have used my entitlement of space ( For pictures ) on our previous blog pages, so because Im tight ( and refused to cough up money to get more space ) I have started a new one ( The last one lasted 2 and bit years). With links back to the old one So newbies can catch up and seasoned followers can reminisce.  This Blog is a different design and is all singing and dancing.

We (as of 6pm UK time ) are still awaiting the arrival of the Piglets. But ho hum I don’t suppose pigs are any different to humans . When they are cooked they will arrive.

Look Left for the Archives and Old pictures and Right for the Facebook updates.. Later all